A group of Ozark High School seniors had a special treat this spring when they received a letter from, well, themselves.

“I honestly was pretty emotional my first time reading the letter because of the maturity I had as a fifth grader,” senior Madison Reed said. “I loved being able to read my memories, and I laughed about the sass I gave my older self to ensure that I wouldn’t throw this letter away.”

Reed was a student in Jill Widel’s class at North Elementary for the fifth grade. When Widel first started teaching 14 years ago, she began a tradition of having her fifth-grade students write a letter to their future self. Widel then writes a note of her own that she seals inside the letters for the next seven years. Each spring, she drops that year’s senior letters in the mail.

“I was sitting there at the end of my first year of teaching and I was sad because these kids were leaving me,” Widel said. “I was thinking about all that they wanted out of life and all they would become, and this letter came to my mind as a way to link the two things. Every year I've had them write about the same three things: What is your favorite fifth-grade memory? What are your goals for the future? What advice do you want to give your older self?”

Senior Justin Baker said it was a lot of fun reading his letter, although he said he “cringed” at parts, realizing he was “not as funny as I thought I was at the time.”

“Fifth grade me didn’t really have a super good idea of what I would be doing, I read myself saying ‘you'll probably get a job at a gas station to start, and hopefully work your way up from there,’” Baker said. “My goals have changed because now I am going to college to get my degree in Exercise Science so I can then go to grad school and become a physical therapist.”

Widel said the project allows her to connect with her students again, even if it’s only in a small way.

“What I love about this project is that I feel like I get to give these kids a special gift from their younger selves and it's a unique experience for each kid. Sometimes they are exactly where they want to be, sometimes life has been different than they expected and maybe the letter is something that can get them back on track, or maybe it's just funny to look at their old handwriting,” she said. “I also love that it gives me a connection again to these kids. As an elementary teacher, you often don't get to see the results of all the work you've put into these kids. This allows me to see where they are at in their lives and that makes me happy.”

Reed said her advice to her future self was something she strives to continue to do today.

“My advice was to be nice to everyone I meet and to always be smiling. That is something that I continuously try to do every day to make a small impact on other lives,” she said. “Some other advice I gave my future self was do not get involved in drama, don’t text and drive, be yourself, and don’t try to act cool.”

Widel doesn’t always see how students react to the letters, but she often has students surprise her at school to thank her with a hug, or sometimes with a Starbucks drink their fifth-grade self promised her in their letter.

“I want to thank Mrs. Widel for doing such a cool thing like this because it really is like coming full circle,” Baker said. “I can remember writing my letter in her classroom, thinking about how far away senior year in 2022 sounded when she told us that’s when we would be getting these letters back. I’m grateful I had such a good teacher back then who was willing to do something extra for her students like this project.” 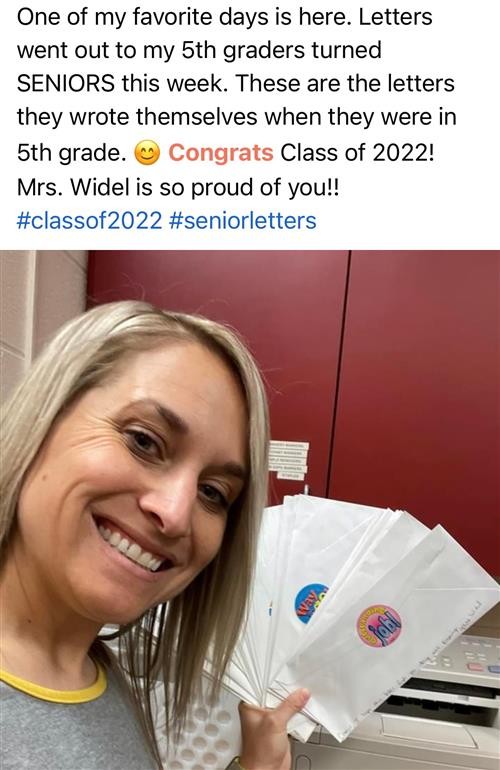 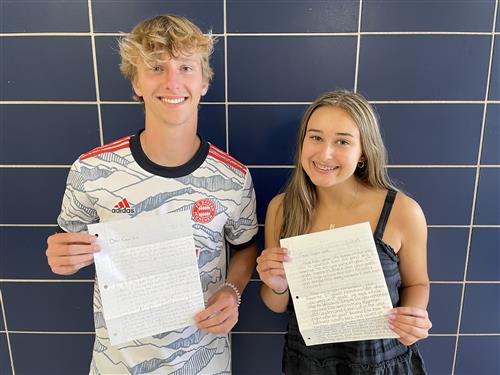 OHS seniors Justin Baker and Madison Reed show off the letters they wrote to themselves in the fifth grade as part of a project their teacher, Jill Widel, does each year.