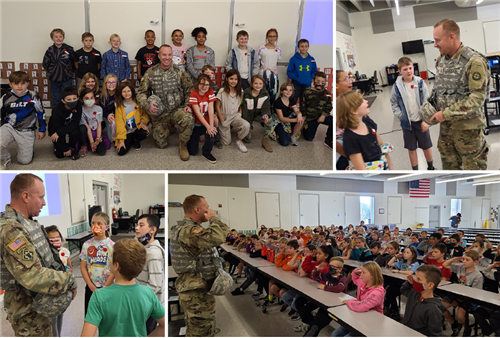 Goode, who serves in the National Guard, talked about the five branches of the military and the different jobs each branch does. Students learned about the different wars the United States has been involved in, the proper way to salute, the various gear military personnel wear and much more.

“I hope the kids learn to appreciate the sacrifice that soldiers make — time from their families and the risk to themselves — all for the cause of trying to make the world a better place,” he said.

Goode will serve a one-year deployment in Kuwait starting in January. 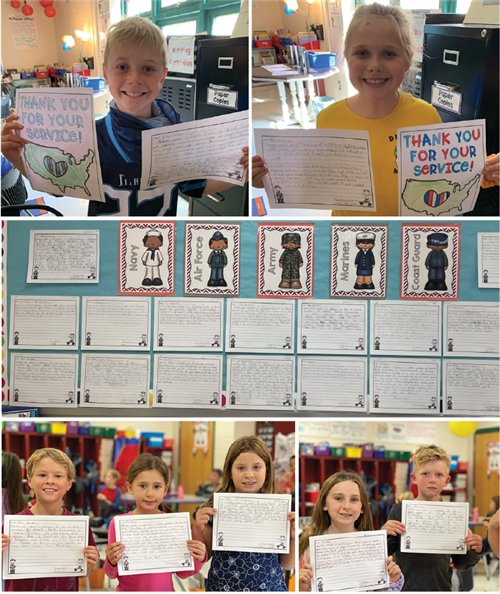 LETTERS TO VETERANS: Imagine receiving a handwritten letter in the mail thanking you for your service in the military. Family and friends of North Elementary third graders who are veterans may just very well receive one of those special letters. Families sent in addresses of loved ones who are currently serving or have served in the armed forces. Students then spent last week learning the importance of Veterans Day before writing letters to put in the mail this week. We wish we could see the faces of these heroes when they open their letters!

VETERANS DAY CEREMONY: Members of the JROTC participated in a special Veterans Day ceremony hosted at Big Cedar Lodge on Nov. 10. The event included a wreath-laying ceremony with a special fly-over and musical presentations. We are always proud to see our students supporting and honoring our veterans. 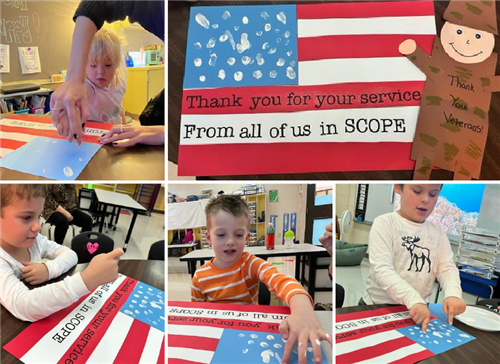 FINGERPRINT FLAG: East Elementary students in Ms. Roussell’s class made a flag and added their fingerprints as stars for veteran Charlie Mansfield, a father of a student. Students then made little soldiers in camo to take home. 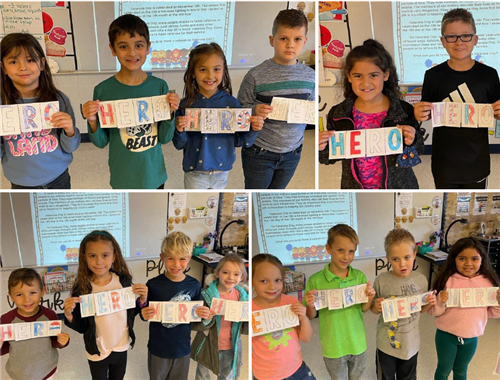 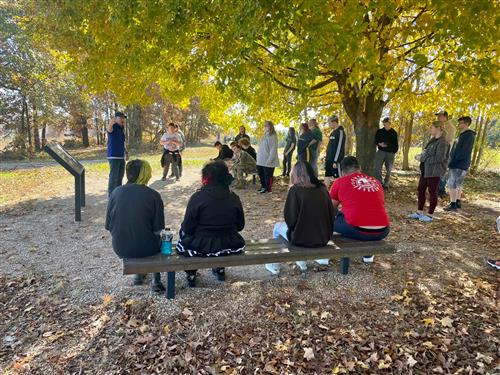 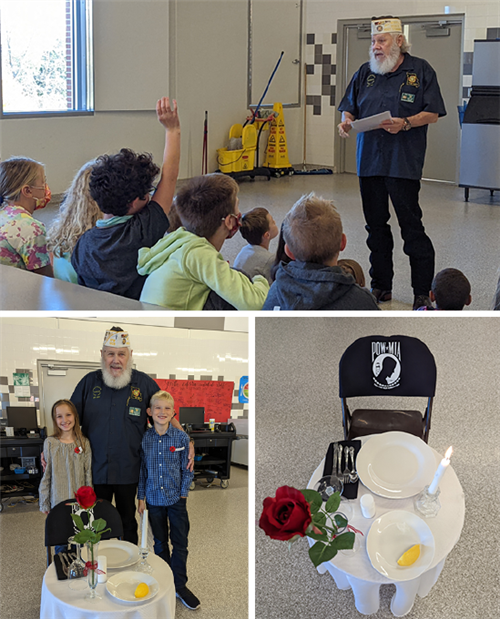 AMERICA'S WHITE TABLE: South Elementary fourth-graders learned how to set a White Table in honor of all of the veterans who have served. Sid Smith with the VFW displayed the White Table setting and explained their meanings to students. Each part of the table represents something a soldier and their family may have felt or gone through. 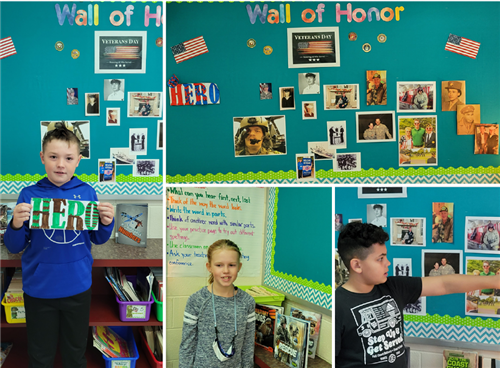 WALL OF HONOR: On Nov. 11, North third graders in Ms. Penrod’s class learned about the different branches of the armed forces. Students made a Wall of Honor in the classroom with photographs of family and friends who have served or are currently serving. Each student had an opportunity to speak to their classmates about the family member or friend on the Wall of Honor. 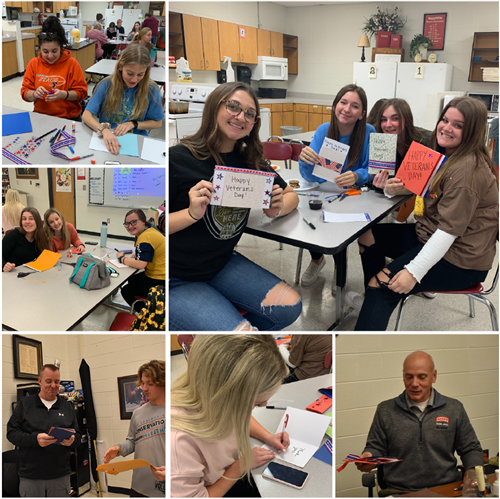 THANK A VETERAN: Ozark FCCLA students came up with a thoughtful way to honor Veterans Day by crafting homemade cards and writing special messages to share with veterans throughout the school district and to family members of FCCLA students who served. Students spent the day delivering their cards to the veterans and thanking them for their service to our country.

THANK YOU: South Elementary first graders in Mrs. McGauley’s class say “Thank you” to our veterans. 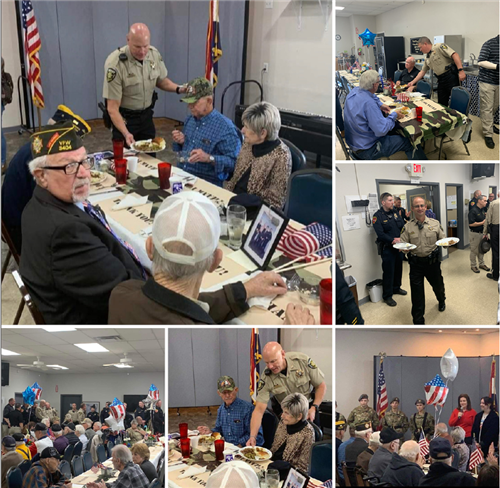 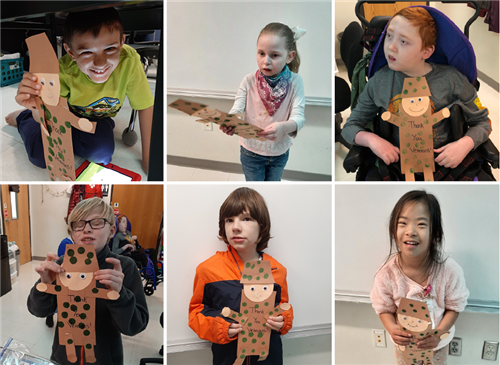 PATRIOTIC PROJECTS: Students in Ms. Clausen’s class at East Elementary learned about veterans on Nov. 11. They had a lot of fun listening to a story about veterans, making a soldier craft, and completing patriotic worksheets. 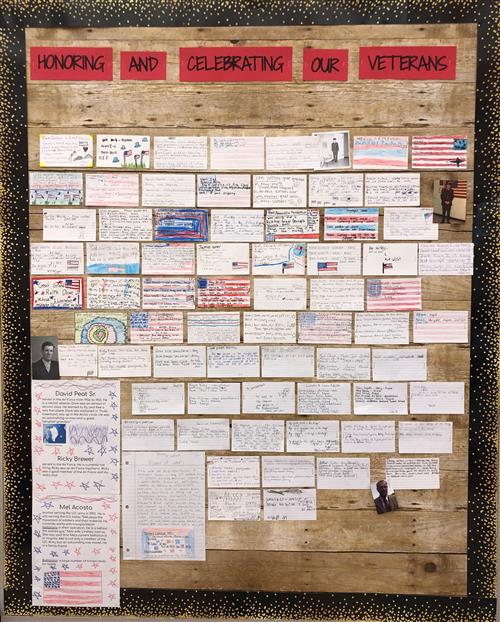 VETERAN CONNECTION: The night before Veterans Day, West Elementary fifth graders were encouraged to go home and ask their families about the veterans connected to them — family members, friends, neighbors, etc. Then they were to record the information on a notecard to bring to school the following day. These students understood the assignment. Several asked for an extra notecard the next day, some brought pictures, some had memorabilia to share from a serviceman in their family, and some even wrote out reports about the veterans in their lives. The conversations that were shared on Nov. 11 in class were so meaningful, personal and impactful. “I never knew I had so many veterans in my family,” one student shared. It’s a privilege to share a passion for history, our country, and the men and women who so bravely protect it with future generations.