There’s a good chance many teenagers don’t know what epidemiology is. However, for the 30 Ozark Junior High students who participate in Science Olympiad, not only do they know what it is, a few may be considering it as a career path.

“It’s the study and control of diseases and how to prevent and diagnose them,” ninth grader Griffin Shaw said. “I really enjoy it. I didn’t think I would have thought about that as a career path, but after doing the event, I’ve discovered I really like the investigation portion of it.”

Epidemiology is just one of many topics in Science Olympiad, with others including ornithology, genetics, earth science, chemistry, anatomy, physics, geology, mechanical engineering and technology. Set up like an academic track meet, Science Olympiad consists of a series of 23 team events in each division with emphasis placed on active, hands-on group participation.

“The kids are a force to be reckoned with,” OJH teacher and Science Olympiad coach Carrie Woods said. “They are all so smart and dedicated. They work hard on their own time.”

OJH has two 15-member teams — an eighth grade team and a ninth grade team. Students can pick up to four events to compete in with a partner. Students stay after school weekly practicing, studying and often building, depending on their chosen events.

“I think it’s a really good opportunity to learn about different sciences, other than the curriculum taught in classes,” Shaw said. “It’s just a really fun experience overall. You become friends with a lot of people and the knowledge that you gain is worth your while.”

Hayden Londeen, ninth grade, has dreams of becoming a chemist, so he enjoys competing in the chemistry-related events.

2019 was a record season for OJH as Shaw’s and Londeen’s team qualified for state competition.

“For the first time in 10 years of coaching, I had an all-boys team that qualified for state,” Woods said. “They competed in every event, which helps.”

This year’s competition is Feb. 22 at Missouri State University and includes teams from 22 counties in southwest Missouri. And while OJH students are hopeful for another run at state, Woods said participating in Science Olympiad is about more than medals. It’s about discipline, comradery, disappointment and perseverance.

“We build a family, rely on one another, work through our differences and come out better people. The program doesn’t just help them grow, it helps me grow too,” she said. “Junior high can be very difficult and I am happy we’re able to offer something that allows them to be themselves, build relationships and be successful.” 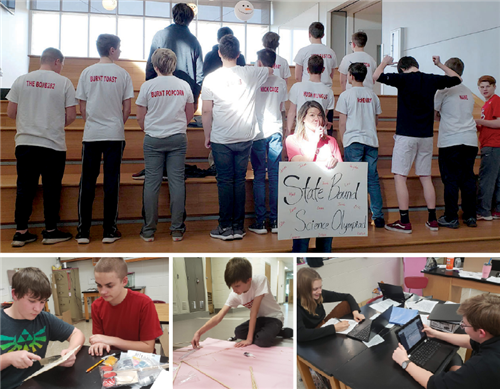