Ozark third grader Zane Fitzpatrick knew he was going to get to see his dad soon, but Jan. 8 was 12 days too soon. So, when his dad walked into the room at West Elementary, Zane was a bit confused.

“It’s been such a long time, we wanted to do a little something extra for him,” said Robert Fitzpatrick, who serves in the Missouri National Guard.

Robert has been serving in Iraq for the past 18 months. Last year, Zane’s second-grade class sent Robert letters and he returned their kindness with a flag, which hangs in the teacher’s classroom. This year, Zane’s third-grade class got to be there when Zane saw his dad for the first time in over 600 days.

Zane admitted when his dad walked into the room toward the end of the school day, he didn’t know what to think or how to react. But afterward, he said he started realizing “this is real.”

After leaving West Elementary, the family planned to stop at Ozark Middle School and Ozark Junior High School to surprise their two other children.

“We have two others, a sixth grader and an eighth grader. Both of them knew he would be home in about two weeks and said, ‘please do not surprise us at school,’” Stephanie Fitzpatrick said. “We are going to pick them up at the other schools. They’ll be surprised when they come out to the car.”

Stephanie said it’s “been a long 18 months” and she’s excited to have her husband home. Robert, however, turned the tables.

“She did a good job keeping the household together. It was no small feat,” he said. 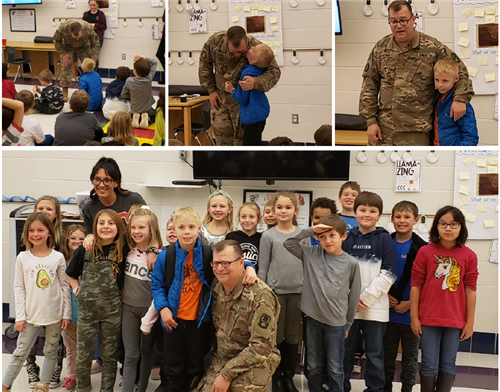