When Ozark JROTC teams arrive at a competition, it often seems like everyone knows it.

“When we walk into the school, you can hear, ‘Oh my gosh, that’s Ozark,’ because of our reputation,” said senior JROTC cadet Mackenzie Wilson, unarmed drill regulation commander.

That, the cadets say, is because of the culture of Ozark’s JROTC program and the long legacy of excellence.

“It’s not about the school, it’s about the cadets,” said junior Shealynn Myers, who is on the rifle team. “Ozark has this great reputation because of the cadets — we’re so motivated and driven to do what the people have done before us.”

“That legacy is what drives the cadets to get out of bed in the morning,” instructor CW3 Jason Allen said, adding that many of the special teams practice as early as 5 a.m. while others stay late after school. “When they strive for that level of excellency, it makes them push harder.”

And pushing hard is certainly something Ozark’s JROTC knows how to do, as today its special teams — sporter air rifle, precision air rifle, raiders, unarmed drill, armed drill and color guard — are all ranked in the top 15 in the nation.

“That’s out of 1,709 JROTC programs; 3,300 color guard programs,” instructor MAJ. Danny Cazier said. “I think what we’re at right now is unprecedented in the nation.”

Cazier said nationwide only one other school placed in the top 15 in two different activities — rifle and raider. And there are a handful of schools in the top 15 within the same general activity, such as armed drill and unarmed drill. Ozark, however, is excelling in six disciplines in three different competitive activities — drill, rifle and raider.

1SG William Crawford, who is in his fourth year leading the rifle team, said the support Ozark’s JROTC program receives allows it to not only grow, but flourish.

“The parents and this community are phenomenal, and we have phenomenal support from the school district. Because of that, we’re able to continue to strive for this excellence,” he said. “Our goal and mission is ultimately to make sure students become better citizens.”

The cadets agree that becoming better citizens is the purpose of the program, and say that is happening through the responsibilities the instructors bestow on the battalion.

“Our program, from the top down, is cadet led,” said senior cadet Trey Vaught, who is the armed regulation commander. “We plan and execute all of our events. The instructors are facilitators, they’re not the ones making the plans and executing them. It allows us to become better leaders, and it allows us to be more successful in the future.”

Allen, who is in his third year leading the drill team, said preparing students for life after high school is what JROTC is all about.

“They are the next generation of leaders,” he said. “We’re facilitating that — and we’re doing a lot of leading too — but it’s giving them an opportunity so every time they get together as a group, they know that they are there to make each other better, stronger, faster, smarter.”

While not all JROTC cadets participate in special teams, Cazier, who leads the raider team, said the success of the special teams ripples through the battalion.

“We feel like a way to keep our battalion going strong is to keep our special teams strong, aspiring, hungry,” he said.

Allen said over half of the 170 students in ninth through 12th grade who are involved in JROTC participate on a special team.

“Any student who decides to take on a special team is committing to almost 200 hours of work in practice alone. They’ll practice 200 hours to compete for 15 minutes — that’s the level of excellency they are striving for,” he said. “We want excellency and first-place trophies, but that’s just the jewelry. We want the cadets to be these amazing human beings in life. I love winning, but I love the reasons why we win. We’re not just successful here, but helping them be successful in life.” 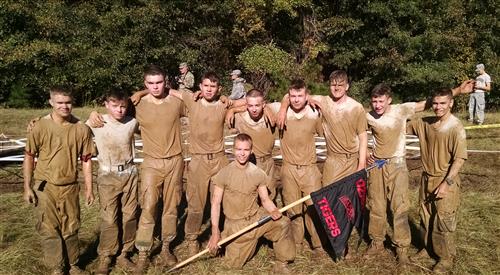