It’s called VIP Color Guard — and appropriately so. Because Theresa Walls wants everyone involved to feel like a very important person.

“VIP Color Guard is so much more than color guard. It is about the relationships the kids have with each other and the opportunity to be a part of something that the students can take pride in,” Walls said.

Walls is a paraprofessional at OHS, as well as the Color Guard and Winter Guard coach. VIP Guard, the only one of its kind in the state, is a way to combine her two passions.

“When I was in college I saw a group similar to VIP perform at Winter Guard Nationals in Dayton, Ohio,” she said. “After that, it was a goal of mine to have my own guard and combine two things I am passionate about — color guard and special education. I wanted to give all students an opportunity to shine and be a part of a performance group or team during their high school career.”

Starting in January, Walls arrives to school early on Wednesdays and Fridays to meet up with 16 smiling students who are ready to spin their flags and rifles. The guard also includes 18 “buddies” who volunteer to help a VIP member learn and perform the routine.

“My favorite part about Color Guard is being with my friends and showing my other friends and family what I can do,” VIP member Peyton Crump said. “I also like the music and the fun moves we do. The flags and the rifles are really cool.”

Throughout practice, students cheer each other on and give high fives. And when Charles Crosby completes his solo, there are even some hoots and hollers.

“My favorite part about VIP Guard is the confidence the members gain and the relationships they build with their guard buddies,” Walls said. “I have one VIP student who their ninth grade year would not even enter the gym for practice. Now, as a senior, he is standing front and center. He knows his routine and is having a blast.”

“I chose to be a buddy because interacting with VIP students and pushing them, and the joy and fun they have through the experience is really cool to see,” Morrison said. “I like how they push themselves to accomplish it. They don’t give up.”

Before Spring Break, Ozark’s VIP Guard, now in its fifth year, was putting the final touches on this year’s performance to the song “Brand New” by Ben Rector. The group was invited to the Mid Continent Color Guard Association State Championships for an exhibition performance, which was canceled due to COVID-19. Despite missing out on their big performance, Walls said this year’s VIP Guard was a success.

“I have seen so much growth and I truly love watching the members perform and watching the guard buddies help their peers,” Walls said. “The students also push me every year to a new standard. Each year we have added more complex components to our routine. They always amaze me!” 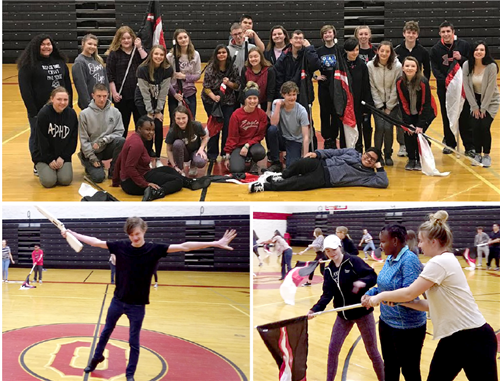