Ozark Cheer is among the 20 Class of 2020 inductees of the January Enshrinement presented by Killian Construction, which was held at the University Plaza Hotel & Convention Center in Springfield. It is the first cheer program in the state of Missouri to be inducted.

“Ozark Cheer has set the bar for high school cheer in this area, if not the state,” Ozark High School Athletic Director Yancey Little said. “The success wouldn’t be possible without the coaches, dedicated athletes and parents. They put a lot of time, money and effort in. And it pays off because Ozark finishes in the top year after year.”

The program dates back to 1979 with coach Nita Jackson. In 1984, Ozark began competing under coach Kim Birkenbaugh. Since 1994, coaches have included Darryl Lyons, Kristi Romines, Jeanine Atwell, Jennifer Clark and Tess Keller. Clark was on staff for 11 years, including eight recent years as head coach, as the program grew from roughly 12 cheerleaders to 16-20 annually. Keller took the reins in spring 2019.

This is the second OHS sports program inducted into the Missouri Sports Hall of Fame, as the Ozark Baseball Program was inducted in 2018. Head Baseball Coach Mike Essick was inducted that same year. 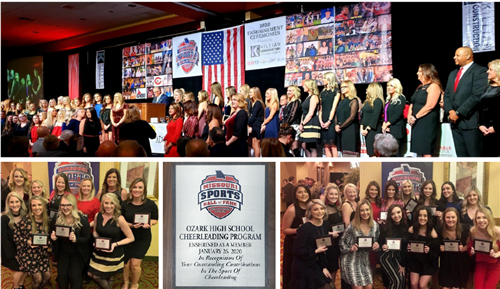