When Ozark High School sophomore Skylar Hembree took an agriculture class, she had no idea it would be the catalyst for her to join the archery team.

“Shooting was part of my ag class and it was really fun,” she said. “I wanted to be a part of the archery team because it’s a good opportunity to meet new people and it’s a good activity to do.”

Hembree also convinced two of her friends to join the team.

“I knew nothing about this and was leary,” OHS sophomore Emma Burton said. “I thought it was just, you pull the bow back and you shoot. But there’s a lot more fundamentals that go into it.”

While the National Archery in the Schools Program (NASP) has been a part of OHS curriculum for about 10 years, the 2020-21 school year marks the first year Ozark has had a competitive team.

“This team is going to be a great fit for students from all kinds of backgrounds,” Coach Travis Phipps said. “Archery is an awesome way to get students involved in a team sport.”

About 30 students joined the inaugural team, which has its first competition Jan. 16 in Billings.

“This is very much in its infancy, but it’s going very well. It’s nice to see them get this life skill,” Coach Nathan Harmon said. “Watching them grow from having no archery experience to hitting the bullseye is really great.”

Phipps said in recent years students have asked about starting a competitive team, and he’s glad to be able to give students this opportunity.

“The involvement has been incredible,” he said. The students are so excited and motivated about starting a team. It’s such a great group of students. I knew we would have some excitement, but this has been beyond my expectations.” 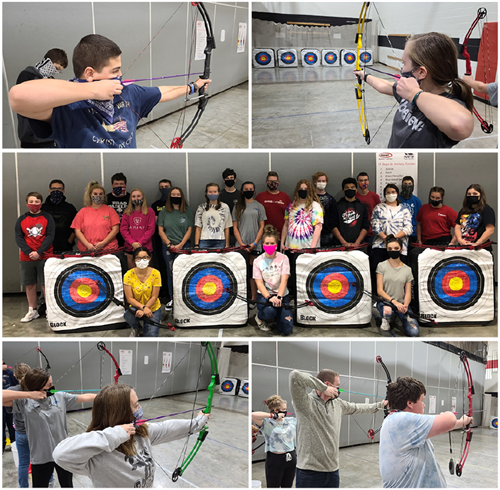