Esports is Exploding in Ozark

Students playing a video game in a classroom or auditorium may not seem like your traditional after-school activity. However, Esports is growing in popularity, and in many aspects, Ozark School District is leading the way. 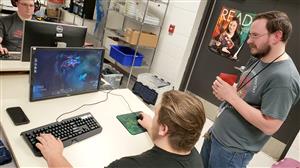 “One of our goals with Esports Club is to try to push back against the typical ‘gamer’ stereotype,” said Jeramie Price, one of the sponsors of the club for students in eighth through 12th grade. “We have an expectation for our members to meet their responsibilities before gaming, including things like grades, behavior and attendance.”

While the club didn’t officially start until this school year, junior Keagan Prewett kicked off the discussion last year through an English class project where he was tasked to make a change at the school. Following his presentation, he took the idea to the activities director. Prewett said he wanted to start the club to give students who weren’t interested in traditional sports a way to get involved while doing something they enjoy. 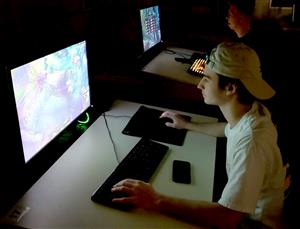 “It’s way better than I expected. I’m a really social person and I love talking to all these new people and interacting with them,” he said. “There are a lot of new kids and I’ve made new friends. I think it’s really helped a lot of people.”

Senior Keaton Muggenburg admits that the club has motivated him to improve his grades.

“Esports can be mentally exhausting because you always have to be thinking about what the next play is and what the enemy team is doing so you can outsmart your opponent,” he said. “The coaches do grade checks every week and I’m more driven to get things done. It’s incredibly motivating to me to do my best so I can maybe get noticed by a college.”

Price, along with sponsors Andy Caudle, Matt Fox and Ethan Anderson, said there are many benefits to Esports, including creating an inclusive school community and making connections. Esports can also lead to college scholarships or other career pathways. 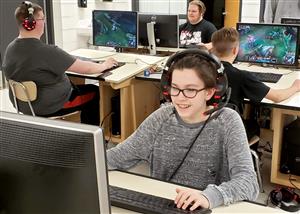 “We foster an environment of teamwork, cooperation, interpersonal skills and healthy competition,” Fox said. “Our long term goal is to form a genuine, competitive team that can compete in tournaments and earn students scholarships or provide other foundations for college.”

Even with the club in its infancy, a few colleges have contacted Ozark to discuss possible scholarships and recruitment. Area high schools are also noticing, as Ozark’s club has hosted administrators from other school districts working to create teams of their own.

In October, Ozark joined area districts to form the nonprofit organization Missouri High School Esports Association (MHSEA) to support the growth of high school Esports. Since then, Esports has flourished in Ozark and across the state.

“We want our students to possibly identify what career path they want to start heading toward,” Price said. “We hope they will receive scholarships to help with their education after us. We hope they will form friendships and their personalities shine in this program.”

“Don’t be afraid to join Esports. I know people might think that you’re kind of a nerd, but really you’re just competing with your peers,” he said. “Esports gives an opportunity for people who don’t necessarily like traditional sports but want to get in the competitive scene. I feel like I’m representing the school, which is really cool.” 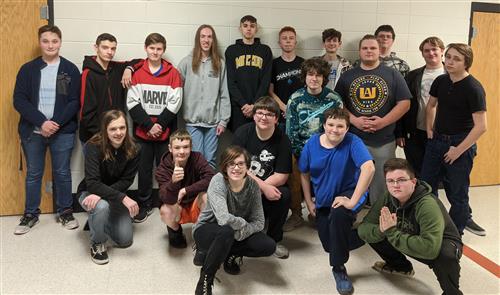